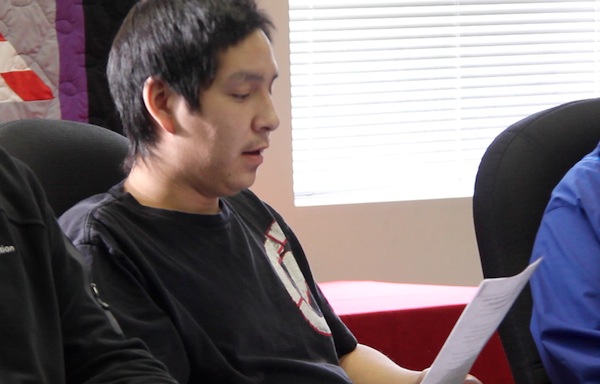 Evan Maud reads an apology on Thursday, February 21, 2013 for falsely accusing Winnipeg police officers of taking him on a starlight tour in the winter of 2010. (SHANE GIBSON / METRO WINNIPEG)

A man who accused Winnipeg police of picking him up and driving him out of town on a so-called “starlight tour” made a public apology for the allegations on Thursday.

Evan Maud, now 22, accused police in 2010 of driving him to the outskirts of the city without his jacket and making him walk back in freezing temperatures. An investigation later found the allegations to be unfounded, along with help from video surveillance and the police cruiser’s GPS unit that showed police never left their district that night. Maud was later charged with public mischief.

Speaking at a news conference on Broadway Avenue this morning, Maud addressed the Winnipeg Police Association (WPA) and apologized to the WPS and officers involved. Maud’s apology was part of a deal made with former police chief Keith McCaskill to avoid a civil lawsuit.

Maud said he has since learned from his mistake and is moving on with his life.