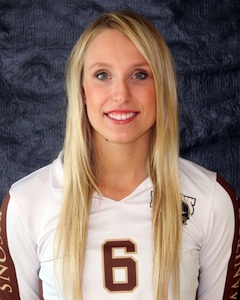 The post-season honour was announced Thursday by the conference, singling out the only Bisons athlete for recognition.

The 20-year-old finished her second year of eligibility at Manitoba and bounced back from a season-ending injury last year to secure her first conference selection.

“Our whole team is very proud of Rachel’s selection as a Canada West First Team All-Star,” said head coach Ken Bentley. “She came back to have a sensational season after sitting out the entire 2011-12 year due to injury. She played at a very high level throughout the entire season and was one of the impact players in Canada West during the 2012-13 season.”

Cockrell was named to the 2010-11 CIS All-Rookie Team during her first season with the Bisons.

Across town, U of W Wesmen volleyball player Ozana Nikolic was named to the second team. The second year left side player recorded over 20 kills in seven regular season games.