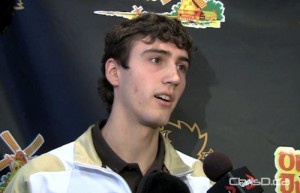 The award was announced Wednesday, along with Pischke being named a 2012-13 CIS First Team All-Canadian at the right side position. Fellow teammate and middle hitter Kenny Rooney was named to the 2012-13 CIS Men’s Volleyball All-Rookie Team.

Pischke, 22, and in his final year as a Bisons athlete, picked up the All-Canadian honour during the 2011-12 season as well.

On the women’s side, Bison volleyball player Rachel Cockrell has been named as 2012-13 CIS Women’s Volleyball Second Team All-Canadian. It’s the first CIS selection for the left/right side hitter in her second season at Manitoba.