Home » News » River Trail Closes for the Season at The Forks

River Trail Closes for the Season at The Forks 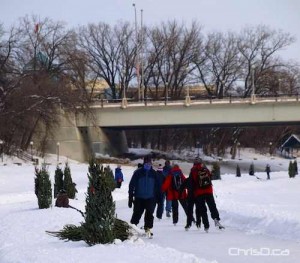 The River Trail at The Forks (CHRISD.CA FILE)

Days of continuous mild temperatures paired with the recent opening of the Shellmouth Dam has resulted in the Assiniboine River Trail closing for the season.

The trail opened December 24 — three weeks earlier than normal — and operated for 66 days. Last weekend, a leg of the trail was closed while officials reassessed conditions.

“We had to make the call to shut it all down since we can no longer get our equipment onto the Red (River),” said Paul Jordan, chief operating officer of The Forks, who maintains the trail.

Jordan said they had hoped to squeeze another week or two out of the seven-kilometre trail.

“We’d really like to emphasize that we won’t be out there testing, maintaining or grooming the River Trail on the Red, so if you decide to use it, it will be at your own risk.”

Other activities at The Forks, such as land skating trails in the Arctic Glacier Winter Park, the canopy skating rink, and snowboard and toboggan hills are still open, weather permitting.