Blue Bomber Mascots Given U of M Campus Tour 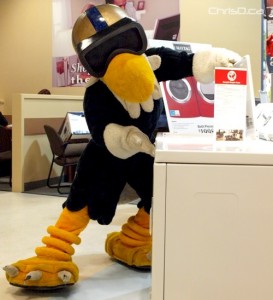 The mascots for the Winnipeg Blue Bombers and Manitoba Bisons will come together this afternoon on the U of M’s Fort Garry campus.

Buzz and Boomer will get a tour from Billy the Bison as they walk from the Frank Kennedy Centre to University Centre, where they will spend an hour interacting with students beginning at noon.

It’s the first time the two Blue Bomber mascots have been given a tour since the football club moved their offices to Investors Group Field in January.

The first big event at the new stadium before the Bombers kick off the 2013 season will be the Taylor Swift concert in June, preceded by a church service in May.