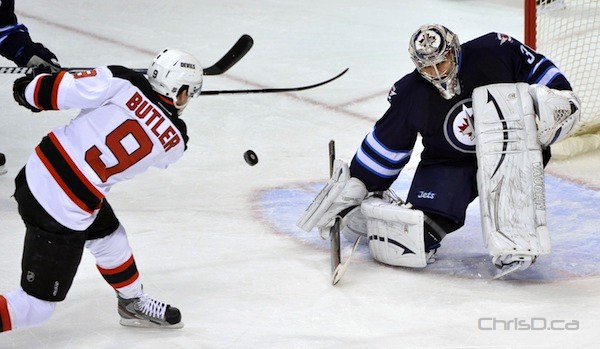 The Jets got the scoring going only eight seconds into the first period when Andrew Ladd moved into the Devils zone and put a back hand past goalie Johan Hedberg to put the Jets up 1-0 and ignite the already fired-up 15,004 at MTS Centre.

The goal tied Ladd for the fastest goal ever from the start of a game in Jets/Thrashers history.

Ondrej Pavelec looked sharp in the first period as he kept the Devils from tying the game with a few spectacular saves on quality scoring chances by the Devils.

“We had a great start scoring the first one eight seconds into the game,” said Pavelec. “It wasn’t pretty, but at the end of the day we got two points and it was a huge win for us.”

The Devils tied the game just over three minutes into the second period when Andrei Loktionov moved into the Jets zone, went from his backhand to his forehand, and snapped the puck through the Pavelec’s five-hole.

The Winnipeg offense looked lifeless early in the third period, but the Jets took the lead back at 11:59 of the period thanks to a big play by Dustin Byfuglien.

With the teams playing four on four, Byfuglien took the puck from behind the Jets net and went end to end, going behind the Devils net and putting the puck out front allowing Andrew Ladd to slip the it past Hedberg.

“I think Buff decided that we’re not going to go to overtime,” said Jets head coach Claude Noel. “Did you see him skate? He looked like a stallion out there, and it was a good play.”

The Jets finished off the Devils with an empty netter by Blake Wheeler at 19:24 of the third.

Andrew Ladd continued his strong play finishing the game with two goals and an assist for the Jets.

“I’ve been getting some nice bounces lately and I have confidence in shooting the puck and hopefully it keeps going,” Ladd said. “It’s tough to cone back from road trips, but I thought we had a great start tonight and found a way to win and that’s a big part of the short season.”

There was a nice moment in the first when the trainers who assisted Zach Redmond after his horrific accident last Thursday in Carolina, were shown on the scoreboard and received a huge standing ovation from the Jets faithful.

The Jets take on the Washington Capitals Saturday at 2 p.m. at MTS Centre.