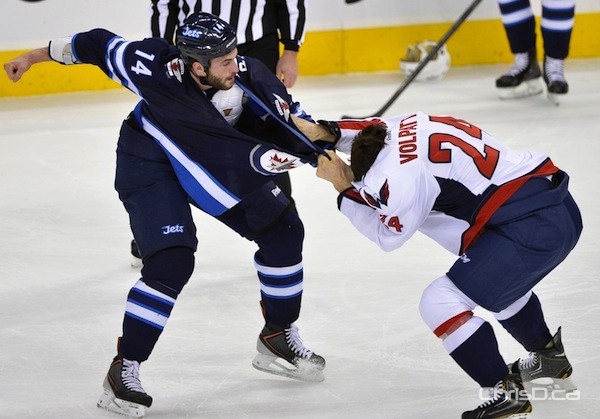 WINNIPEG — Twenty-three-year-old goaltender Braden Holtby stopped all 35 of the shots he faced to secure his third shutout of the season and a 3-0 win for his Washington Capitals over the Winnipeg Jets on Saturday afternoon at MTS Centre.

Coming in, the Jets had won five of their last six, including four on the road. The loss drops them out of the playoff picture for the time being, and to 4-6-0 at home and 10-10-1 overall.

“You get yourself in trouble if you sit back and say we won a few games in a row here — we’re due to have a bad one,” said Jets alternate captain Mark Stuart. “The good teams rarely have bad nights.”

“After the first period I don’t think we got the momentum back at all.”

Per usual as of late, the Jets roared out of the gate, gaining the early momentum by outshooting Washington 15-5 through the opening 20 minutes. But once the second started, the Capitals took over and never looked back.

“In the second period we started to take it over I thought,” said Washington head coach Adam Oates. “I thought we really had a good second and after that you feel good about yourself.”

A Matt Hendricks tally midway through the second made it 1-0 and proved to be the eventual game winner. Amazingly in the third, Washington scored twice on just three shots as Troy Brouwer and Mike Ribeiro notched goals just 52-seconds apart to wrap the scoring.

Winnipeg continues it’s struggles with the man advantage, going 0-for-3 on the power play to put them at a near-embarrassing 1-for-32 in their last 12 games.

“I thought tonight was a little bit better than it has been in the past,” said a surprisingly upbeat Jets head coach Claude Noel of their special teams struggles. “The numbers aren’t great. They haven’t been great. We’ve been winning in spite of it.”

The Jets now fly down to Sunrise, Florida to face the Panthers to begin a four-game road trip. They return home on Tuesday, March 12 to face the Toronto Maple Leafs.

Jets forward Anthony Peluso is suspected to have broken his hand during his first period fight with Aaron Volpatti. He is officially listed as week-to-week with an upper-body injury. Claude Noel said, “he’ll be out for a while.”

Jets forward Blake Wheeler also suffered an injury while blocking a shot just moments before the Capitals’ game-winning goal. Noel said, “I think he’s OK,” and described the injury as, “probably a heavy-duty bone contusion,” to the side of Wheeler’s leg.