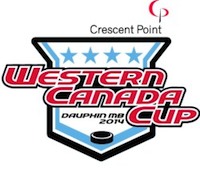 Organizers of the Crescent Point Energy Western Canada Cup have launched a ticket sales campaign in partnership with the Dauphin Kings.

The hockey tournament takes place April 25 to May 4, 2014 in Dauphin and will include a host team and the champion from each of the four western leagues. The 13-game tournament will include a round-robin schedule followed by two semi-final games and a championship game.

The second opportunity to purchase discounted regular season tickets and tournament packages will be May 1 to July 31, 2013 for $389. Hockey fans can purchase their seats at Dauphin2014.com, DauphinKings.com or by telephone at 1-888-676-7661.

The Western Canada Cup Champion and the runner-up will both represent Western Canada at the RBC Cup National Junior A Championship. The inaugural Crescent Point Energy WCC will be held this spring in Nanaimo, B.C. from April 27 to May 5, 2013.