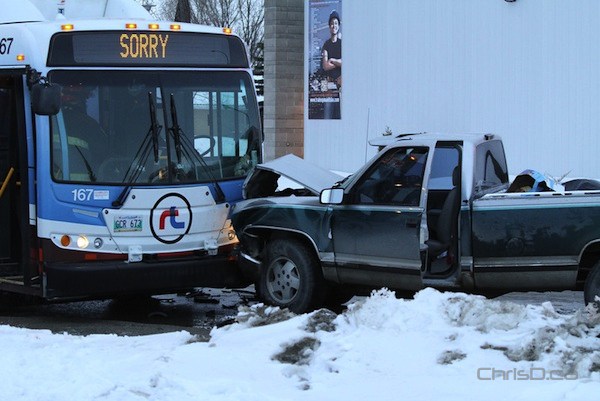 A pickup truck and Winnipeg Transit bus collided on Sunday, March 3, 2013 in East Kildonan after the driver of the pickup suffered a medical emergency. (HOWARD WONG / FOR CHRISD.CA)

A crash involving a Winnipeg Transit bus and a pickup truck on Sunday may have been caused by a man’s medical condition.

The crash happened at around 5:30 p.m. at Kimberly Avenue and London Street in East Kildonan.

Police say the man driving the pickup truck likely suffered a medical emergency and veered into the path of the oncoming bus. He was taken to hospital in stable condition, while at least one passenger on the bus was treated for a neck injury.

No charges are expected to be laid.