Three in Custody After Downtown Shooting 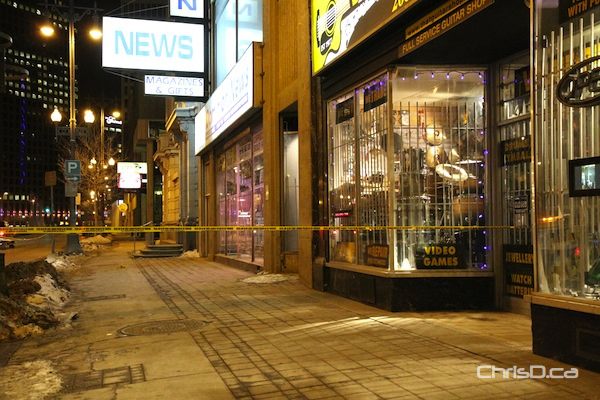 Police tape surrounds Dominion News in the 200 block of Portage Avenue on Sunday, March 3, 2013 after a shotgun was fired. (HOWARD WONG / FOR CHRISD.CA)

Three men are in custody after a shotgun was accidentally fired into the side of a vehicle.

Winnipeg police say the incident in the 200 block of Portage Avenue happened at about 9:30 p.m. on Sunday. According to police, a drug transaction was taking place earlier in the evening in the Garden City area when a confrontation began. An unknown man brandished a shotgun and confronted two other men while in a Honda CRV, when one of the men took out a replica firearm to challenge the first man carrying the shotgun. The suspect with the real gun fled the scene and left the firearm behind.

Two men then drove down Portage Avenue where they parked in front of Dominion News after picking up an associate. The three began handling the shotgun when it fired into the door of their vehicle.

Police arrived shortly after and found cash, marijuana, and replica gun and a modified shotgun.

All three men remain in custody and face several weapon and drug-related offences.