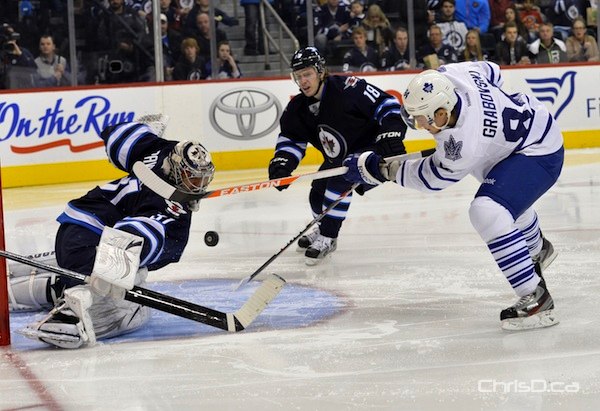 WINNIPEG — It was a scrappy and penalty-filled affair to start Tuesday night’s matchup at MTS Centre, as the Winnipeg Jets and Toronto Maple Leafs played like a pair of long-time rivals. But by the time the dust settled and the Jets finally took their foot off the gas, Winnipeg fans left bragging about a near-dominant 5-2 victory over the either lauded or loathed Maple Leafs.

The Jets opened the scoring as Nik Antropov finally snapped his team’s embarrassing 1-for-36 run on the power play as a Dustin Byfuglien point shot went off the veteran and past Leafs netminder and Manitoba-native James Reimer. It was Winnipeg’s first goal with the man advantage since way back on February 5.

The intensity then spiked as fighting majors were handed out to Colton Orr and Chris Thorburn, as well as team captains Dion Phaneuf and Andrew Ladd.

“I thought we had that intensity in our game tonight that we need to have going forward,” said Ladd. “It’s a little easier in this building when they have that much energy going and we can feed off that.”

“Andrew Ladd really set the pace of the game with his play,” said Winnipeg head coach Claude Noel. “He showed why he’s captain of this team.”

Leading 2-1 early in the second, the Jets went down two men as Antropov and Mark Stuart took slashing and boarding penalties just six seconds apart, giving the Leafs 1:54 of five-on-three to bounce back.

“That was a big point in the game when we had that big penalty kill,” added Ladd. “We had a lot of great efforts from our goaltender and the three guys on the ice to get that job done. I thought that was a huge part of the game, but I thought we played a pretty solid 60 minutes all the way through.”

Tuesday night was the first time the Jets have scored five goals in a game this season.

“It’s really nice to keep taking it to a team and keep your foot on the gas,” said Evander Kane, who potted his eleventh of the season on a third period breakaway that chased Reimer from the game.

Kane also felt his team’s physical play played a major role in getting the win.

“It’s good to see guys stepping up and not backing down and defending themselves. I think that really sparks your team when everybody is playing physical.”

The Jets visit Toronto on Saturday night in what is sure to be an intriguing rematch, but first they host the New York Rangers on Thursday at MTS Centre — a team which they are currently tied with for the eighth and final playoff spot in the Eastern Conference.