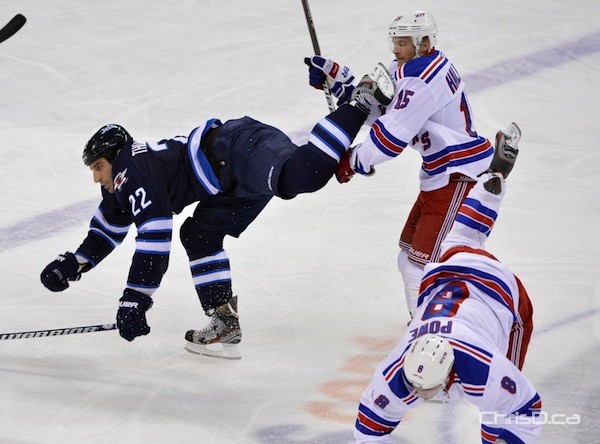 WINNIPEG — The Winnipeg Jets leapfrogged the New York Rangers into the eighth and final Eastern Conference playoff spot with a 3-1 victory over the Blueshirts on Thursday night at MTS Centre.

Ondrej Pavelec’s superior goaltending as of late has elevated Winnipeg to a 14-11-2 overall record, including points earned in each of their last five games (4-0-1).

“It’s the biggest difference from last year, that we are able to close out the games,” said the Jets netminder who stopped 28 shots in the win, including a first period penalty shot from the oft-dangerous All-Star Marian Gaborik.

But it goes well beyond the goaltending, as the Jets seem to be hitting their stride as they enter the second half of this shortened season.

“These last two games have been really, really tremendous,” said defenceman Ron Hainsey who lead all Winnipeg skaters with 23:42 of ice time. “We really came out with a great tone to the Toronto game the other night and we carried it through, I thought, this game. With a little more physical play and a lot of speed — we really gave teams trouble with our speed. I think we had two breakaways in the third. (Andrew Ladd) hit a crossbar. We really had a good third period.”

Point shots from defenceman Dustin Byfuglien caused both of Winnipeg’s opening goals as Nik Antropov buried a rebound on the power play in the game’s opening two minutes for his fourth of the year, while Antti Miettinen was awarded his first of the year as Byfuglien’s shot went off his stick then his shoulder for the game winner late in the second.

Byfuglien now has five assists in his last two games, while Andrew Ladd’s empty-netter in the final minute gives him six points in his last six games (2G, 4A).

Washington’s win over Carolina earlier in the evening puts Winnipeg just one point behind the Hurricanes for the Southeast Division lead, and third place in the Eastern Conference.

The Jets now set out for a two game trip through Ontario where they face the Maple Leafs and the Senators on Saturday and Sunday before returning home for a four-game home stand beginning on Tuesday, March 19 against the Bruins.