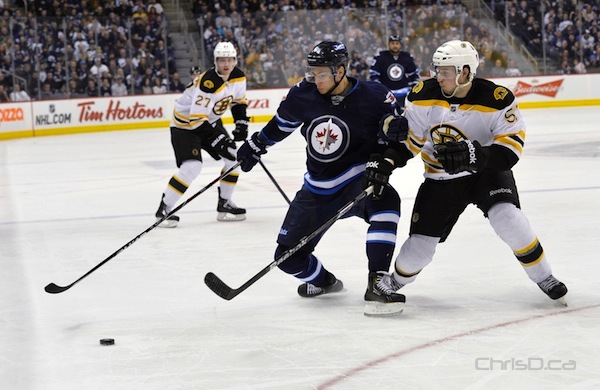 WINNIPEG — In truly dramatic fashion, the Winnipeg Jets erased a late-game 1-0 deficit to hand the Boston Bruins only their sixth loss of the season with a 3-1 win at MTS Centre on Tuesday night.

The Jets improve to 16-12-2 and catapult into third place in the Eastern Conference by leapfrogging the Carolina Hurricanes who lost earlier in the evening. It is also the first time Winnipeg has won a game this season when training after two periods (1-7-1).

“It wasn’t an easy game for us,” said Winnipeg goaltender and the game’s first-star Ondrej Pavelec. “Boston knows how to play those games and they know how to close those games. Every time we play them it’s a close game. We had a little bit of trouble in the neutral zone. They play really well. After the first goal we kind of panicked a little bit and sat back, but we came back in the third.”

“You’ve got to give them credit,” said Jets forward Blake Wheeler who tipped home a Zach Bogosian point shot on the power play. “They definitely had us frustrated through two periods, and we came in here after the second period and kind of regrouped and settled down and said, you know what, it’s a one-goal game. Just put your head in the right place and we can score a goal. And that’s what we did. We had a more positive mindset in the third and were able to get that first one.”

Just 57-seconds later, Evander Kane banged in the game-winner before Wheeler buried an empty-netter to seal it. Wheeler’s two-goal performance is his second in his last three games, and is now tied for the team-lead with captain Andrew Ladd with 14.

Now in command of the Southeast — at least for the time being — the Jets have an important week of divisional hockey ahead. They play back-to-back home games against division-rival Washington on Thursday and Friday before wrapping their four-game home stand against Tampa Bay.