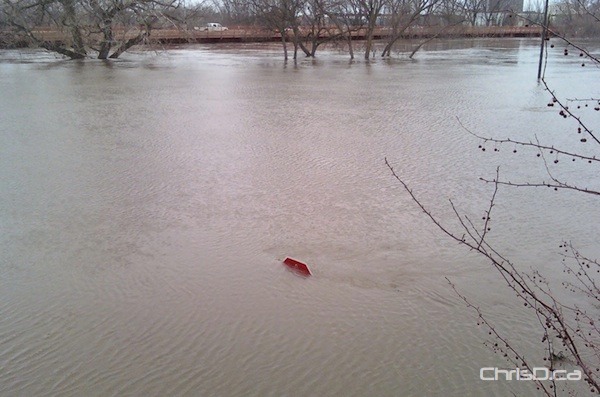 The top of a stop sign is barely visible on a street in Fargo, North Dakota on Friday, April 8, 2011. (WPGCAMERAMAN / CHRISD.CA FILE)

Flood forecasters south of the border are calling for an increased flood risk along the Red River after the region received nearly a foot of snow this week.

The National Weather Service in North Dakota on Thursday called for a “major flood risk” along the Red, with significant breakout/overland flooding to occur. Forecasters also said the I-29 corridor could be impacted and compared it to 2010/2011 water levels.

Pembina, North Dakota has a 96% chance of major flooding along the Red River, with a similar risk existing for the Fargo-Moorhead area. Grand Forks will see a somewhat increased risk of moderate to major flooding at 50%.

The NWS said cool and snowy/wet conditions could delay the initial spring runoff into early April. A rapid melt and more precipitation would increase the risk.

Manitoba will release its updated spring flood forecast next week.