Déjà Vu as Holtby and the Caps Blank Jets 4-0 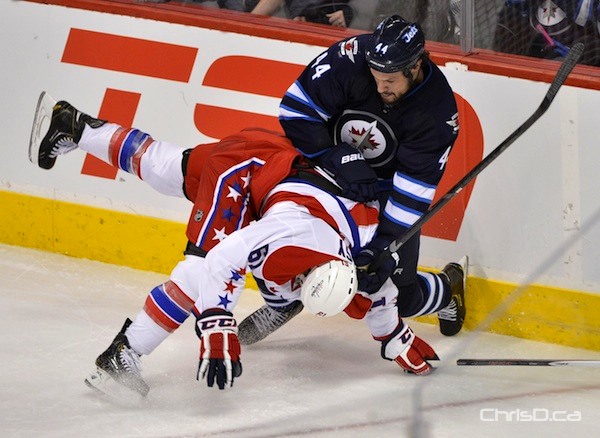 WINNIPEG — Call it a peculiar case of déjà vu at MTS Centre Thursday night, as the Washington Capitals blanked the Winnipeg Jets 4-0 — nearly three weeks to the day the Caps came into town and shut out the Jets 3-0.

Make it six-consecutive periods Winnipeg has been unable to solve Braden Holtby, as the 23-year-old Washington netminder stopped 20 shots to capture his fourth shutout of the season.

“We frustrated them,” said Capitals bench boss Adam Oates. “We came out in the second, and obviously you know between periods they’re going to get talked to by their coach and they’re going to come a little harder and we had to be ready for that, and match their intensity, and we did a good job of it.”

“We’re all looking, trying to figure out a solution,” added Noel. “It’s easy to sit there and look and say ‘oh gee, they didn’t play very well — it’s because of this and that.’ Sometimes there’s no clear cut answers. That’s the beautiful thing about this job. It’s about finding solutions. That’s the beauty.”

“We obviously have to come up with something different. Maybe a different game plan and find a way to crack these guys,” said Winnipeg captain Andrew Ladd.

“It’s nice that there’s a short turnaround and we have a chance to redeem ourselves right away.”

The captain speaks of the scheduling anomaly that puts the Jets in an instant rematch with the Capitals right back at MTS Centre Friday night.

“We’re right back at it in less than 24 hours,” said Jets defenceman Zach Bogosian. “We’ve got to make sure we’re ready to play and get back on the winning side.

Goals from Troy Brouwer and Marcus Johansson made it 2-0 through 20 minutes before the Capitals sealed it with third period markers from Alexander Ovechkin and Nicklas Backstrom. Ovechkin was all over the Jets, recording a game-high five shots on net and three points.

The Jets have elected to skip their pre-game skate Friday morning in preparation for an early 6 p.m. start for Game 2 against the Caps.