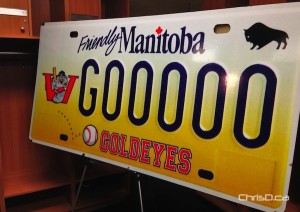 The Winnipeg Goldeyes are no longer the odd team out after the baseball club and province jointly announced a specialty licence plate on Friday at Shaw Park.

The 2012 American Association Champions are celebrating their 20th season this year and fans will soon be able to show their Fish pride on their vehicles.

Applications for the gold plate with blue lettering and Goldeyes logo can be submitted beginning Saturday at any of the province’s 300 Autopac outlets. The new plates will cost $70, with $30 from every plate purchase going towards the Winnipeg Goldeyes’ Field of Dreams Foundation.

“The Goldeyes and our Field of Dreams Foundation thank both the government and Manitoba Public Insurance for providing our team and our foundation with this opportunity,” said Goldeyes GM Andrew Collier. “Over the past few years many of our fans have inquired about a Goldeyes plate. Now, they can proudly show their support of the Goldeyes on their vehicles.”

Vehicle owners can change their plates based on the season, or simply buy a pair to hang on their wall as a souvenir.

The Winnipeg Blue Bombers and Winnipeg Jets also have their own custom plates fans can purchase. The move also follows the offering of bilingual plates released in February and firefighter plates introduced last March.