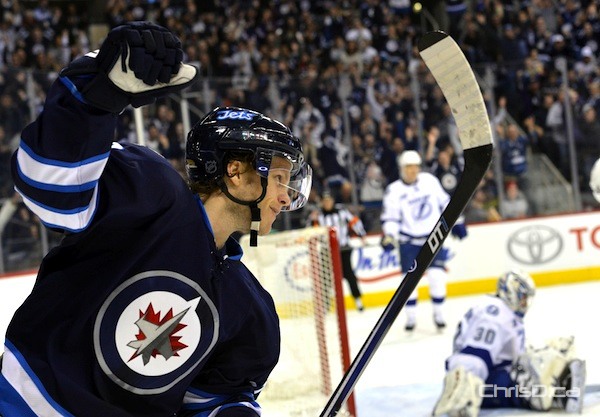 WINNIPEG — It wasn’t the prettiest, but the Winnipeg Jets got back into the win column by holding on to beat the Tampa Bay Lightning 3-2 at MTS Centre, wrapping their four-game home stand with a 2-2 record.

The Jets were fortunate on many fronts Sunday night; squaring off against a Bolts team that fired head coach Guy Boucher less than 24-hours before, and facing a farm call up goaltender in Cedrick Desjardins who was playing in only his seventh career NHL game.

“There’s things we could’ve done better. It wasn’t a perfect game,” said Jets forward Bryan Little whose goal and two assists put the 25-year-old in on all of Winnipeg’s markers. “But we found a way to win… We couldn’t say that against Washington. We’ll take the two points and focus on the next one and get better from here.”

“We won the game. That’s pretty much what we did,” said Winnipeg head coach Claude Noel. “We still had a couple of bleeps, but other than that we still managed it pretty good when it was 3-2 because it was pretty tense. There’s a lot at stake for us… There’s a lot we’re trying to do here, so you can feel the impact of the games.”

Following a pair of embarrassing and confounding home losses to the Washington Capitals on Thursday and Friday in which the Jets could only muster a single goal over six periods, Sunday’s victory keeps them atop the Southeast Division with 36 points — four up on second-place Carolina who they visit on Tuesday.

“You’re going to face adversity. And it’s less about the adversity because that’s going to come. It’s how you deal with it,” said Jets forward Blake Wheeler who also finished the game with a pair of helpers. “From the coaching staff on down, we dealt with it well. We didn’t panic. We knew we’ve been playing really good hockey, and we just wanted to bounce back tonight.”

The elevated play of goaltender Ondrej Pavelec has kept Winnipeg in some close games as of late, and his 23-save performance against the offensively-gifted Lightning proved his worth once again.

“(Pavelec) has been arguably our best player pretty much for a long stretch of time,” added Noel. “I’m just thankful that he’s in the net. Let’s put it that way.”

“It wasn’t easy. (They were) tough losses against Washington,” said Pavelec. “A lot of guys put in a strong effort (tonight) and I think we needed this one. But now we’re going on the road and it’s going to be another big series.”

The Jets face the Hurricanes twice this week, in what may help paint late-April’s playoff picture; Tuesday in Carolina, and then back in Winnipeg on Saturday night. Winnipeg travels to Pittsburgh on Thursday to face the blazing hot Eastern Conference-leading Penguins.