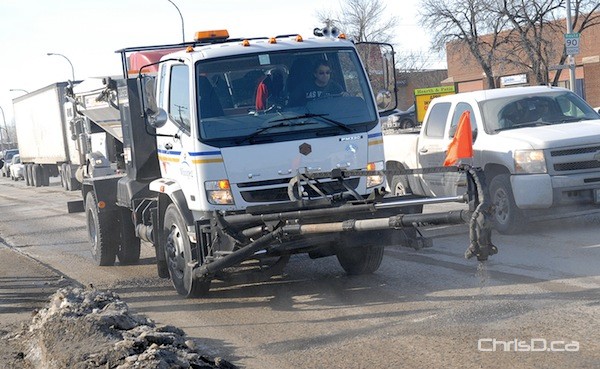 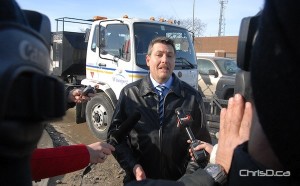 Ken Allen with the city’s Public Works Department speaks to media regarding the pothole situation on Tuesday. (STAN MILOSEVIC / CHRISD.CA)

The City of Winnipeg has increased the number of crews being used to fill potholes around the city.

Pothole patchers and other machinery are focusing on main routes, bus routes, and collector streets since pothole repairs began in mid-February.

Six pothole patching machines and five hand-asphalting crews that are working in all areas of the city as the temperatures rise.

“At this time of year when we are experiencing numerous freeze/thaw cycles and potholes are starting to appear on city streets, it is important to remember that the number of potholes is directly related to the weather we receive,” said Miles Watsko, acting manager of the Streets Maintenance Division. “Although the pothole situation appears to be about the same as last year at this time, the situation can potentially change if the weather becomes unfavourable.”

Potholes can be reported to 311 by phone/fax and by e-mailing [email protected].