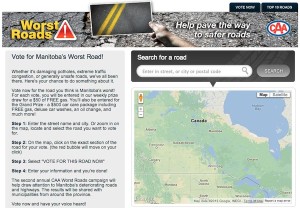 CAA Manitoba is calling on drivers to nominate the worst roads in the province for the second year in a row.

The Worst Roads campaign was launched on Wednesday, soliciting votes to determine Manitoba’s most derelict and unsafe roads.

“But it’s not just crumbling curbs and ankle-deep potholes that we want people to vote on,” Mager added. “We also want to hear what people think about the roads with extreme traffic congestion, missing signage or generally unsafe conditions. Anything that disrupts your commute to and from work whether it be by car, bus, bike or foot, we want to hear from you.”

Mager said it isn’t about complaining, but to pinpoint the problems to ensure there is a timely plan to fix them.

Voting ends on April 24 at CAAManitoba.com/worstroads and on Facebook. People can vote once per road, but for as many roads as they wish, and will be entered in prize draws for each vote. Seven CAA clubs across the country are taking part in the campaign.

Nearly 3,500 votes were cast last year for more than 400 roads in the province. Next to St. James Street, Highway 21 south of Brandon and Marion Street were near the top of the list.