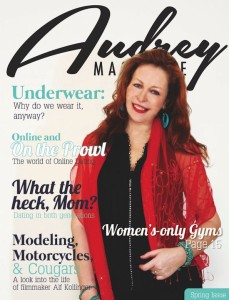 Students in Red River College’s Creative Communications program have been hard at work over the last several months putting together their own magazines.

Part of the course’s regular curriculum, students are tasked with choosing a subject to report on and then creating a physical magazine from cover to cover. Their finished products were shown off Thursday during the annual Magazine Trade Fair being held at the college’s Roblin Centre downtown.

One of the magazines showcased this year was Audrey Magazine by RRC student Holly Beraro, who has been working in a small group for four months on the project.

“The magazine targets eccentric women between the ages of 35 and 50,” Beraro said of her group’s work. “It includes steamy articles about underwear, and informative articles about fitness. Audrey Magazine also has a “Dear Audrey” section (similar to Dear Abby) and ads created by our group members.”

Beraro’s booth was an attention-grabber, as she planned to dangle lingerie from a clothing line and also have a photo booth on site.