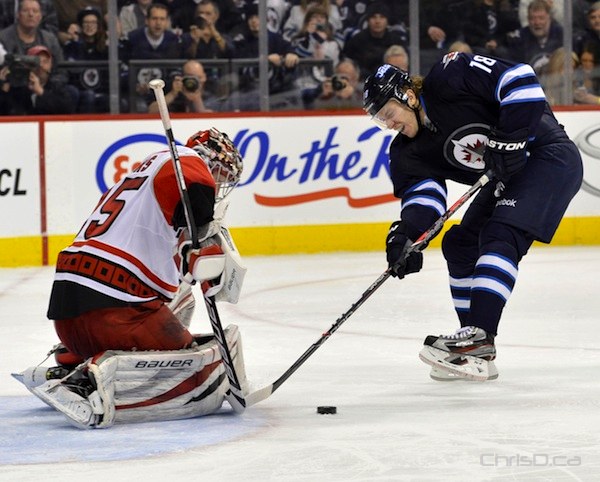 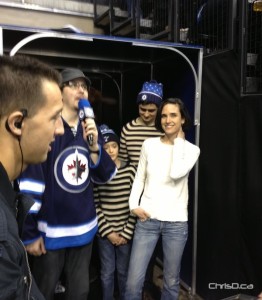 WINNIPEG — It was arguably the most important game of the year for the Winnipeg Jets, but the Carolina Hurricanes walked out of MTS Centre with a 3-1 win over the Jets Saturday afternoon.

Carolina came into the game winless in seven games, but with the win now sit only four points back of Winnipeg for first in the Southeast Division and third in the Eastern Conference.

“We had an opportunity to extend the gap,” said Jets head coach Claude Noel. “Nobody is more disappointed than us. We didn’t come here anticipating this today, and the division race is going to get played out but it’s not what we had in mind.”

It was a horrible start for the Jets as Carolina got up by a goal only 1:06 into the first. After Eric Staal tried a wrap-around, and Tuomo Ruutu couldn’t bury the rebound, the puck went to Alexander Semin who snapped it past Jets goaltender Ondrej Pavelec and gave Carolina the early lead.

It got worse for the Jets at 9:40 of the first. After Evander Kane took a hooking penalty, the Canes went up by two goals one second after that penalty expired, when Jussi Jokinen took a pass from Joni Pitkanen and fired it behind Pavelec.

“They got off to a good start,” said Jets defensemen Zach Bogosian. “They played a good game, and their goalie played a really good game for them. It’s definitely tough when you run into a hot goaltender that was making the saves he was making tonight.”

Carolina goalie Justin Peters made 34 saves in the game, with many of them being made on quality scoring chances by the Jets.

“He made some good saves for them so he was definitely on his game tonight,” said Bogosian.

Chris Thorburn added some much needed life to the Jets and the 15,004 at MTS Centre when he fought with Canes defenceman Tim Gleason late in the first, but the Jets failed to capitalize on that momentum and finished the first period down two goals.

The Jets got back into the game only 1:26 into the second period when Evander Kane rushed the puck to the side of the Canes net and put it out front allowing Olli Jokinen to tip it past Peters, making the score 2-1.

The Jets penalty killing looked sharp in the second period killing off four straight Carolina power plays in the last ten minutes of the period and receiving a huge ovation for their work from the Jets faithful, but the Jet failed to get an equalizer in late in the second.

“I don’t think we were able to take advantage of some of the momentum that happened,” said Noel. “There was pockets of momentum where we took advantage of killing those penalties and a couple five-on-threes. I thought we could have pounced on something there and we didn’t.”

Carolina padded their lead only 28 seconds into the third when Eric Staal took a pass from Semin and snapped the puck past Pavelec putting the Canes up 3-1.

The Jets now head out on a three game road trip starting in New York where they face the Rangers Monday night.

“We’ve got to put this one behind us,” said Jets forward Nik Antropov. “It stings right now. Most everyone put a lot on the line today so it was a taxing game, but next week is going to be tough. It’s going to be another tough few games and we’ve got to get back on track here sooner than later.”