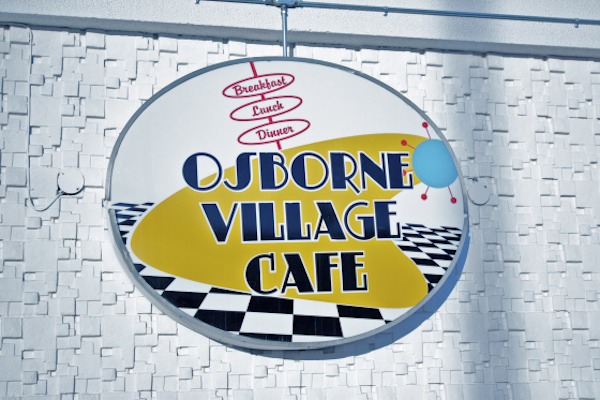 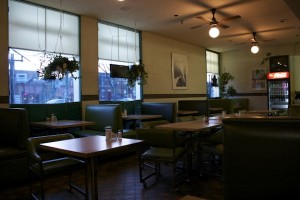 Inside of the Osborne Village Café (EDEN RAMSAY PHOTO)

The Osborne Village Café may not be the first place one may expect to find finely crafted, healthy, and trendy dishes.

Early last month, the restaurant received a complete food makeover. With a new menu, new wait staff, and a new skilled chef, Leighton Fontaine, the place is definitely one to watch out for.

The food also comes at a great value with the most expensive menu items priced at only $10. Fries and coleslaw can be added to any dish for $2.50. Soup or a side salad may be added as well for $3.50.

The decor of the Osborne Village Café is quite humble and this is a big part of its charm. It seems like the kind of place Guy Fieri would reveal as locally kept secret on the Foot Network television show “Diners, Drive-Ins and Dives.”

As we waited for our food, “Survivor” played on the TV in the background. It was later turned off to quietly fill the place with the sweet crooning sounds of Led Zeppelin and Guns N’ Roses.

I decided to try the potato and beet latkes breakfast option. Out came three potato latkes that were laced with thinly shredded beets and topped with two poached eggs. Beets are a great option as an ingredient in latkes and added a nice colour, texture and flavour contrast to the poached eggs. On top of the eggs was cooked spinach sautéed with white wine and a deliciously creamy dill crème fraîche sauce with just the right amount of dill in it. Brunoised red peppers were lightly scattered on top and added a splash of bright colour and refreshing flavour. The meal was also surrounded with a few slices of apples, cantaloupe, grapefruit, for a nice, balanced meal. 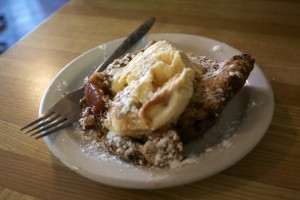 My date got the pulled pork sandwich which came in a very generous portion. The homemade fries were non-greasy, and had excellent taste with just the right amount of crisp. The pulled pork sandwich came open-faced on grilled French bread. The maple syrup BBQ sauce was a nice combination of smokey flavour sweet and distinctive flavour of maple. The pork itself was juicy, cooked well with a smooth, smokey flavour. The pulled pork was topped with a slice of sweet, roasted pineapple. The raisin-cabbage coleslaw was also some of the best coleslaw I have ever tried. The sliced cabbage tasted very fresh and was doused in a balsamic vinaigrette dressing.

I will be sure return to this gem of a restaurant and when I do I am definitely reordering the Jäger crisp. I knew I had to try this because the menu said that a traditional apple crisp came with a side of Jägermeister ice cream. I have never even heard of it before and knew I had to try it. It was very good. It had a subtle hint of Jägermeister’s complex spiciness with notes of cinnamon and caramel. This blended nicely with the cinnamon flavours of the apple crisp that comes with the dish. The apple crisp itself was warm and a very nice balance of brown sugar sweet, cinnamon spice, and apple tartness. It came lightly dusted with powdered sugar and the ice cream on top.

The Osborne Village Café is open from 8 a.m. till 8 p.m. from Monday to Saturday and 8 a.m. till 4 p.m. on Sunday. The breakfast, lunch, dinner and dessert options and are available during all hours of operation which is nice.

For updates on the Osborne Village Café check out their Facebook page.