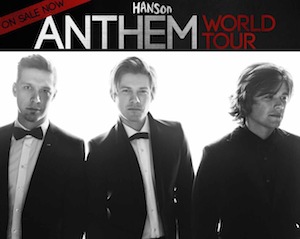 They once sold out arenas, but former teen heartthrobs Hanson will play the McPhillips Station Casino this time around.

The trio will play Winnipeg on October 9 and 10 in support of their sixth studio album, Anthem.

Five years building a fanbase as an independent band led to a meteoric rise with the 1997 international smash single MMMBop from their debut album Middle Of Nowhere.

Tickets to see brothers Isaac, Taylor and Zac Hanson go on sale Tuesday, April 9 through Ticketmaster and CasinosOfWinnipeg.com for $35 and $40, plus fees.