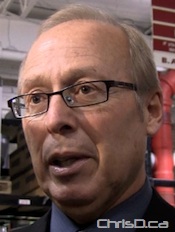 A conflict-of-interest case that could have seen Winnipeg Mayor Sam Katz thrown out of office has been dismissed.

Katz was accused of using taxpayer funds to hold a $3,000 Christmas party for city councillors in 2010 at Hu’s Asian Bistro on Ellice Avenue — a restaurant he owned at the time.

Keyser deliberated three days before handing down her decision. Katz wasn’t in court for the proceedings, which began on Tuesday.

Katz’s lawyer, Robert Tapper, requested that Chan pay $25,000 in legal costs associated with the case. Chan was later ordered to pay $10,000 of those costs to Katz.

Keyser said Katz will be judged in the eye of public opinion should he decide to run for reelection.