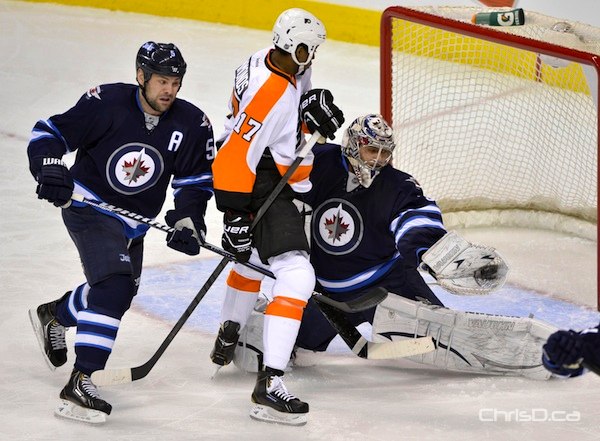 WINNIPEG — The Winnipeg Jets showed serious fight on Saturday afternoon, snapping their five-game losing streak with an explosive four-goal second period to hand the Philadelphia Flyers — winners of four-straight coming in — a 4-1 loss.

The victory puts the Jets (19-19-2, 40 points) back into first place in the Southeast Division for the time being, with the Washington Capitals (18-17-2, 38 points) right on their heels. The Caps hold three games in hand and play Florida Saturday night.

“Obviously, we had to win this game to give ourselves a shot to continue to make the playoffs,” said Winnipeg forward Evander Kane following his two point outing, including his 14th goal of the year. “We have six more games at home and two more on the road, and those are going to be just as important.”

The Jets struggled after a quick first period start, totaling just four shots on net in the opening frame and zero beyond the five-minute mark. But a scoring burst in the second — surely welcome following six total goals for in their last 5 games — gave the floundering home team some life, and a much needed taste of victory late in the season.

“I think we just stuck with it,” said Bryan Little who also recorded a goal and an assist in the contest. “We missed the net on a bunch of shots. (Andrew Ladd) had a breakaway, missed the net, so we weren’t really too concerned about our shots on net.”

“The main thing is we stuck with it. We didn’t give up. We kept pushing and that’s what we needed. What can I say? It was a big game.”

“A lot of the goals were good. They were just hard, dirty goals. And that’s what you have to do,” said Winnipeg head coach Claude Noel. “There’s no easy way to win. You’ve got to pay a price, and we had to today.”

“To me it just shows we’re capable of playing this game, and that’s what you always strive to have more of,” added Noel. “Call them ‘A’ games. Call them whatever you want. We’ve been ready, but a lot of times we’ve been ready to play but sometimes we hadn’t seen it for 60 minutes… I thought it was a smart game.”