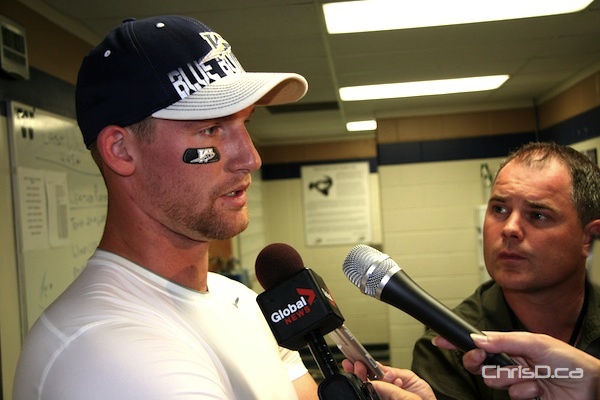 Less than an hour after announcing the release of quarterback Alex Brink, the team has signed two new QBs for the upcoming 2013 season.

Import quarterbacks Max Hall, 27, and Chase Clement, 26, will suit up for the Blue and Gold when training camp opens.

Hall played for the Arizona Cardinals as an undrafted free agent in 2010 and appeared in six games that season — including three starts — completing 39 of his 78 pass attempts for 370 yards and a touchdown.

Clement played at Rice University and finished his collegiate career with several Conference USA records including career touchdowns (99 passes, 25 rushes and one receiving).

“We’re very excited to add these two young quarterbacks to our roster,” Blue Bombers vice-president and GM Joe Mack said. “Both of these men excelled at the collegiate level and have experience in the professional ranks as well, and we look forward to watching them both compete for roster spots in training camp.”

On Brink, Mack said, “We would like to thank Alex for his contributions to our football team over the last three seasons. Unfortunately, we feel as though we need to go in a different direction when it comes to our quarterbacks this season and Alex will not be a part of that equation. We wish him well in his future.”

Brink signed with Winnipeg in 2010 and saw action in 26 games over the past three seasons, starting seven, and completed 226 of 398 passes for 2,573 yards with 13 touchdowns and 13 interceptions.