Another Second Period Burst Puts Jets Back on Track 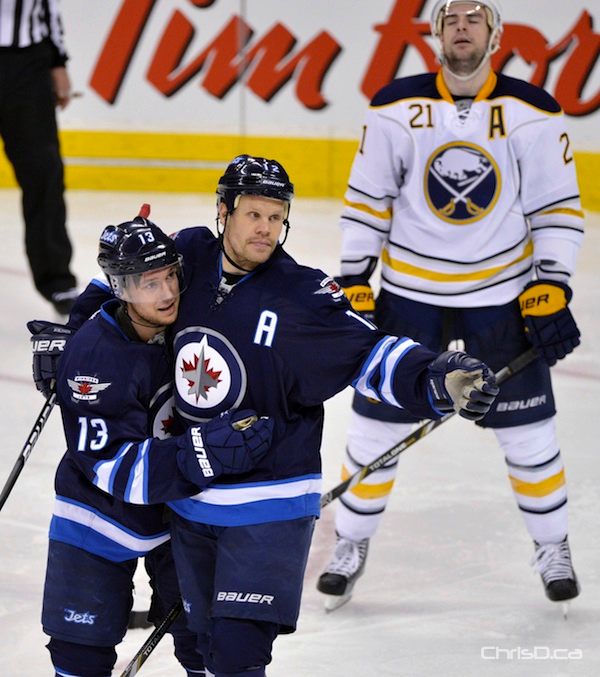 WINNIPEG — For a second straight game, the Winnipeg Jets found a second-period offensive burst. And for a second straight game, the Jets rode it to victory. On the heels of a recent five-game skid that had many writing the team off for the season, Tuesday’s 4-1 win over the Buffalo Sabres has the Jet Planes back on the correct nautical trajectory in trying to track down a post-season birth.

“We played the first 15 minutes pretty strong. We were in control,” said Jets head coach Claude Noel. “No change. No rattle. We just got back into the second, played it, and then eventually things went our way… That’s two games we’ve done that so that’s good. That’s building trust in yourself.”

Gagnon’s marker is the first of his 31-game NHL career, and proved to be the game-winner.

“The first one always is the one you remember for the rest of your life,” said Gagnon. “You’ll take goals any time, but this big of a moment you need goals from everyone.”

Gagnon speaks of the importance of the Jets’ current home stretch as they sit just outside the playoff picture with seven games remaining in the regular season, including five on MTS Centre ice.

“It’s nice to get something going (at home),” said Andrew Ladd. “We obviously know we have to get on a little run here, and there’s no better place than to do it in this building and get the fans on our side.”

And a stretch of success at home will prove critical for the Jets’ playoff hopes — just two wins removed from a five-game losing streak.

“There’s obviously a better feeling in the room,” added the Winnipeg captain. “We just wanted to get that feeling of winning hockey games and feeling good about ourselves back in this room, and winning games is the ultimate cure to that. I think we like what we’ve done the last two games, but we know there’s a long way to go here and we’ve got to keep our foot on the pedal.”

Winnipeg’s win leapfrogs them over New Jersey for ninth in the Eastern Conference standings and one spot out of playoff position. The Jets remain two points back of Southeast Division leading Washington — and third place in the conference — as the Capitals also earned a pair of points Tuesday night with a 3-2 win over Montreal.

The Jets host the Florida Panthers on Thursday night in the third of their six-game homestand.