UFC 161 Ready to Rumble in Winnipeg 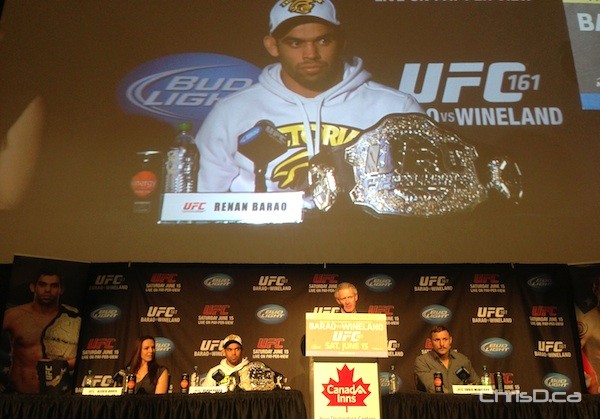 UFC Canada president Tom Wright speaks during a press conference at The Met in Winnipeg on Wednesday, April 10, 2013 alongside fighters for UFC 161. (DARRIN BAUMING / CHRISD.CA)

WINNIPEG — It’s time for Winnipeg fight fans to throw down.

The Ultimate Fighting Championship introduced its main event contenders to a nearly packed Metropolitan Entertainment Centre on Wednesday, as interim bantamweight champion Renan Barao defends his title against Eddie Wineland on Saturday, June 15 at UFC 161 at MTS Centre in Winnipeg.

“To use an MMA or boxing metaphor, I think as a city Winnipeg punches above its weight,” said Tom Wright, UFC director of operations for Canada, Australia, and New Zealand. “This is a great sports town. Everybody knows that… It’s a very, very knowledgeable fan base here so I was very confident in recommending Winnipeg as a site for the UFC.”

“Your MTS Centre will again be the centre stage for what will be a global pay-per-view event,” said Jim Ludlow, President & Chief Executive Officer of True North Sports & Entertainment. “True North and the MTS Centre are excited to bring another first to our city — a product we intentionally waited for until we could bring the best of the best to Winnipeg.”

Tickets for UFC 161 go on sale to the public on Friday, April 12 at 10 a.m. at the MTS Centre box office or through Ticketmaster.