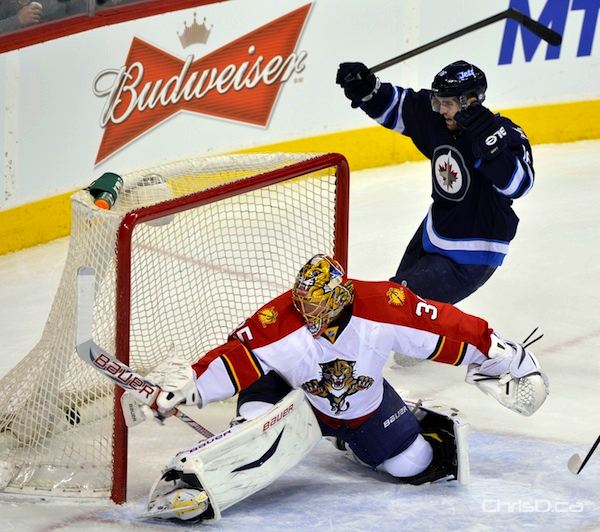 WINNIPEG — The Winnipeg Jets are starting to roll right when they need to.

Evander Kane’s two goals and Bryan Little’s pair of helpers lifted the Jets to a 7-2 walloping of the Florida Panthers at MTS Centre on Thursday night. The win is their third consecutive, and puts them back at a true .500 record for the season (21-19-2) and within striking distance of the NHL’s post-season dance card.

“What you get is players playing with confidence,” said Jets bench boss Claude Noel. “It’s almost like you’re lighter, you’re faster, you’ve got time. It’s like the game slows down. I think a lot of guys are playing well right now. It’s contagious.”

A blinding five-goal opening frame was a figurative ping-pong match that resulted in a 2-2 hockey game just 2:37 after the game’s opening goal from Winnipeg’s Aaron Gagnon — his second-career NHL goal, and second in as many games.

A three-goal burst in the second period — where Grant Clitsome, Dustin Byfuglien, and Evander Kane all scored within 1:53 of each other — puts the Jets atop the league in second-period team scoring with 47 goals on the season.

“The first period was pretty back and forth,” said Clitsome, who finished the game a plus-3 while filling in for the injured Tobias Enstrom on the Jets’ top pairing alongside Byfuglien. “But it said a lot about our team to come back in the second and establish a bit of a lead.”

Winnipeg, now idle for a rare four full days, received no good news from the out of town scoreboard on Thursday night as the Capitals, Senators, and Islanders all emerged with wins to remain among the Eastern Conference’s top-8.

“That’s something we can’t control,” said Jets captain Andrew Ladd, whose first-period goal proved to be the game winner. “We put ourselves in this situation and all we can do is win hockey games and hope for the best.”

The ninth-place Jets’ next action is Tuesday night when the Tampa Bay Lightning visit MTS Centre in the fourth of Winnipeg’s current six-game home stand.