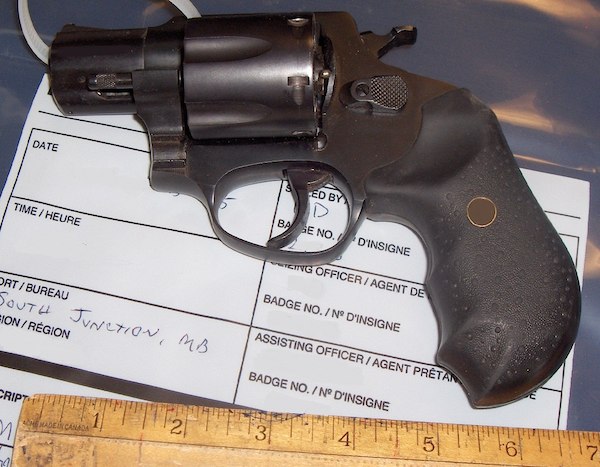 A firearm seized from a traveller at the South Junction border crossing into Manitoba on February 5, 2013. (CBSA / HANDOUT)

Border agents at the South Junction crossing in Manitoba seized a revolver in February.

That was just one of the many highlights over the past two months released by the Canada Border Services Agency on Monday.

On February 5, a Minnesota man was attempting to cross into Canada when his vehicle was examined. CBSA officers found loose rifle ammunition and shotgun shells. They later examined the centre console area and found a holstered, loaded revolver. The man was arrested for smuggling a gun into Canada, and the firearm and vehicle were seized. The man was able to reclaim his vehicle after paying a $1,000 penalty.

Border agents refused him entry into Canada and he was returned to the U.S.

On February 20, CBSA officers in Boissevain seized numerous drugs from inside a duffle bag being transported by an Alberta couple. Their vehicle was also seized since it was used to smuggle the contraband. They were issued a $2,050 penalty to reclaim the vehicle.