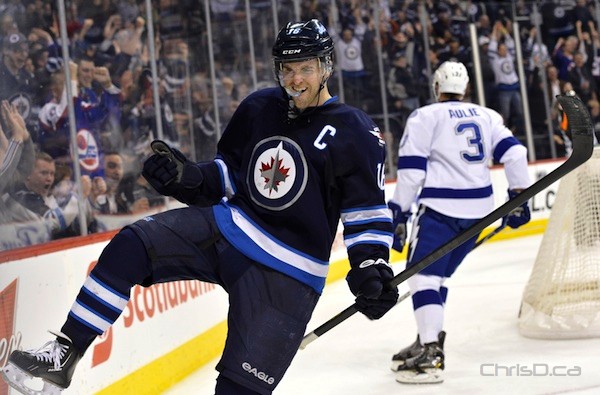 Winnipeg Jets’ captain Andrew Ladd celebrates his second goal of the game against the Tampa Bay Lightning during the second period of play at MTS Centre on Tuesday, April 16, 2013. (FRED GREENSLADE / REUTERS)

WINNIPEG — The Winnipeg Jets are on a season-high four-game winning streak, and it couldn’t be happening at a better time.

Tuesday’s 4-3 shootout win over the Tampa Bay Lightning keeps Winnipeg (22-19-2) on pace in the Eastern Conference playoff race with 46 points — good for a tie for 8th place with the New York Rangers.

Jets captain Andrew Ladd clinched it in the shootout to cap his two-goal, three-point night, giving him an eye-popping nine points in his last five games.

“You saw it tonight. (Ladd) is our leader in the dressing room and he leads us on the ice,” said Ladd’s linemate Bryan Little. “He really took tonight serious. He went out there and put us on his back and he did a great job. When he’s going, I think he’s one of the better players in the league.”

Ladd’s five-game scoring run is just one game short of his career-high streak of six games, and gives him 41 points in 43 games.

“He drives the bus,” said Jets head coach Claude Noel. “He was going good. You get to see he’s a pretty effective player.”

“I thought we did a lot of good things,” said Ladd after scoring his team-leading 17th and 18th goals of the season. “We don’t like giving up a 3-1 lead, but we showed some character in coming out on top and we did a lot of positive things.”

The Jets received little help on the out-of-town scoreboard as three teams they are chasing for a post-season birth also found success on Tuesday. The sixth-place Senators and seventh-place Islanders both secured two points with victories, while the Southeast Division-leading Capitals retained their four-point cushion on Winnipeg with their eighth win in a row.

Winnipeg concludes their current six-game homestand with a Thursday matchup against Carolina and an ever-important matinée on Saturday with the New York Islanders.