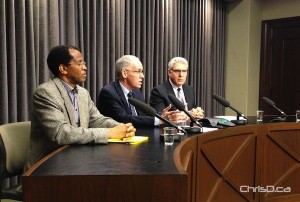 Manitoba flood forecasters on Thursday released an updated spring outlook, increasing the risk of flooding in the Red River Valley south of Winnipeg.

Additional snowfall in North Dakota is the main culprit in the higher flood risk, with levels rising to half a foot to one foot higher than in 2009, but still significantly less than 1997.

Emergency Measures Minister Steve Ashton said the updated outlook will result in greater evacuations of residents than was originally planned in some rural areas.

“Based on the Environment Canada long-range weather forecast, melt and subsequent run-off could start as early as this weekend, though it would require sustained warmer conditions with temperatures above freezing overnight,” the province said.

Winnipeg’s Red River could crest as late as the last week of May.

South of the border, North Dakota flood officials are calling for an increased risk than was previously predicted, mainly due to the accumulation of snow the state received last weekend. The heightened flood threat along the Red River in areas such as Fargo doesn’t bode well for a city already on edge about possibly seeing a record flood.

According to the National Weather Service, areas of North Dakota could see water levels exceed those of 2009. The risk has prompted so-called “sandbag central” to begin churning out thousands of more sandbags this week to prepare. The river is expected to crest in Fargo by the end of April.