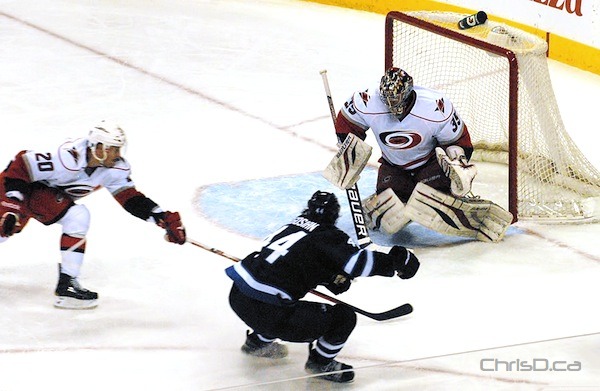 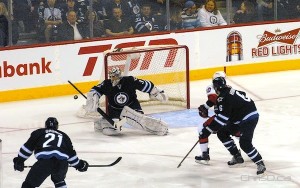 WINNIPEG — Dustin Byfuglien buried an Andrew Ladd rebound 1:23 in to overtime on a two-on-one rush to give the Winnipeg Jets a 4-3 win over the Carolina Hurricanes at MTS Centre on Thursday night.

The victory — Winnipeg’s fifth in a row — is the team’s longest since a six-game streak during the 2010-11 season when the franchise was known as the Atlanta Thrashers. The two points gained puts the Jets just two back of the Southeast Division-leading and third-seeded Washington Capitals with four regular season games remaining.

While all four matchups are critical in chasing down one of the eight post-season spots for the ninth-place Jets, two of their four upcoming opponents are teams they want to eliminate from the race — the New York Islanders, who they play in Winnipeg on Saturday afternoon, and the Capitals who they visit on Tuesday night.

“The rest of the way here we’ve got teams that we’re in the race with,” said Ladd, whose two assists on Tuesday ties a career-high six-game point streak. “That puts even more pressure on us to come up with some big victories. So, no rest for the wicked, I guess.”

“The rest thing is good because we finally got a four-day break,” said head coach Claude Noel of his team’s time away from game action this past weekend. “I think that everybody had a break somewhere in (their schedule). We got ours at the end — we’re just thankful that we’re still kind of in it because we had that five-game speed bump we hit.”

The five-game losing streak that preceded their current winning streak had many thinking it was curtains for the Jets’ playoff hopes.

“I’m a huge believer that we finally got rested,” said Blake Wheeler, whose goal and pair of helpers gives him a five-game scoring streak. “We were run through the middle a little bit. We played a ton of hockey and a ton of travel… I think we were tired, honestly, and we finally got rested and we realized the situation we were in. We had an opportunity to still make the playoffs after losing five in a row. It’s brought a lot of excitement and jump to guys. Now we can’t think about the five that we just had. We’ve still got a really good opportunity here in a big game — it’s going to be a fun game Saturday.”

Puck drop at MTS Centre between the Islanders and Jets is at 2 p.m.

Jets defenceman Zach Bogosian — not normally known for his offensive contributions — scored Tuesday’s opening goal and added an assist, giving him six points (1G, 5A) in his last three games. He now has 13 points in 32 games this season.