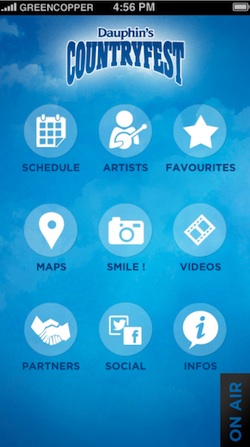 Available as a free download, the app provides a complete festival schedule, the latest news and real-time updates with what’s happening on-site and year-round. Users can also access music, videos, and photos. Through a partnership with MTS, cellular service will also be increased during the four-day event.

“It’s becoming more and more important for people to stay connected and wired-in while they’re at events, so MTS is going to help us make sure our fans can do that during Countryfest weekend,” said Eric Irwin, president of Dauphin’s Countryfest. “We’ve also gone ahead and created an app with all kinds of cool features designed for Countryfest, so people can stay connected to us not only during festival weekend, but year-round.”