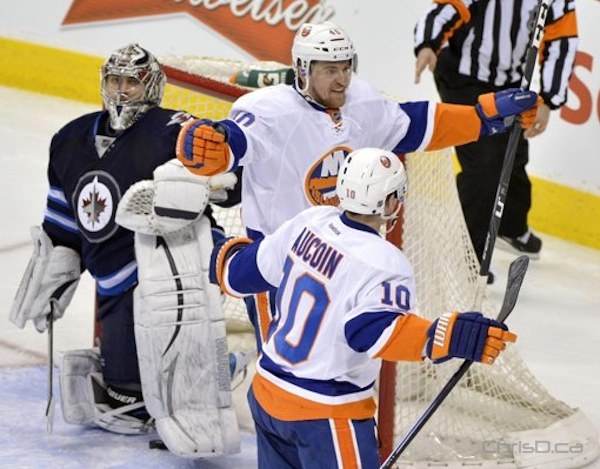 WINNIPEG — An inspired comeback bid by the Winnipeg Jets fell short on Saturday afternoon, as the New York Islanders came up with a 5-4 shootout victory over the Jets in front of 15,004 at MTS Centre.

Despite the loss the Jets still picked up a valuable point, and have picked up 11 of a possible 12 points in the last six games.

“We’re obviously going to be pleased with that,” said Jets defensemen Ron Hainsey. “We had to put together this kind of stretch after the five game losing streak, and obviously we’re past that now and we took care of the business we had to here at home, and we have to continue to win most of the way I would think.”

The Jets went down 4:21 into the first when Islanders forward Frans Nielsen took a pass from Kyle Okposo and wristed the puck past Jets goalie Ondrej Pavelec.

Winnipeg got back into the game at 10:42 of the first when Jets defensemen Zach Bogosian took a drop pass from forward Blake Wheeler and slapped the puck past Islanders goalie Evgeni Nabokov igniting the raucous MTS Centre crowd.

It didn’t take the Islanders long to take the lead back as Josh Bailey took a pass from beside the net from Okposo and snapped it by Pavelec at 12:14 of the first.

The Islanders went up by two at 9:47 of the second when Matt Martin took a pass from Jesse Joensuu and put it past Pavelec, but the Jets once again made it a one goal game when Kyle Wellwood took a rebound from an Evander Kane slap shot and wristed it into a wide open net at 10:27 of the second.

The Jets tied the game at 13:24 of the second when when a long pass from Evander Kane sent Kyle Wellwood in on a break away and he wristed the puck over Nabokov to the delight of an absolutely deafening MTS Centre crowd.

“It was fun to play in,” said Jets captain Andrew Ladd. “The atmosphere and the energy in the rink was great, and I think both teams fed off of it and when they really got into it, it was fun hockey to play in.”

Wellwood almost got the hat trick and gave the Jets the lead at the end of the second putting the puck past Nabokov, but time had already expired when the puck crossed the line.

The Islanders took the lead back at 9:13 of the third period when Michael Grabner took a pass in front of the net from Colin McDonald and tipped the puck past Pavelec.

The Jets tied the game after the Islanders’ Lubomir Visnovsky took an interference penalty at 17:59 of the third and the Jets pulled Pavelec. Ladd passed the puck to Bryan Little who kicked it from his skate to his stick and put it past Nabokov only seven seconds after the penalty was called, and with just over two minutes remaining in the game.

Jets coach Claude Noel said the decision to pull Pavelec as soon as the penalty was called was an easy one to make.

Both teams failed to score in overtime and the game went to a shoot out and after Brad Boyes and Ladd exchanged goals, John Tavares scored in the last round of the shootout to give the Islander the victory.

The Jets now sit at 23-19-3 and hit the road for a game on Monday night in Buffalo against the Sabres.