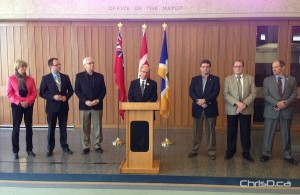 The backlash of the Selinger government’s provincial budget continues, as a group of Manitoba mayors spoke out against it on Thursday.

“Our citizens are looking for long-term solutions, not patchwork fixes,” Katz said of the infrastructure funding shortfall.

“Manitoba communities require a stable, long-term infrastructure funding solution. All across Manitoba, people pay taxes with an expectation they will be able to drive on well-maintained streets and roads, but this budget will not help.”

Katz on Wednesday held his own presser to speak out about the $277 million in new revenue collected from the one percent PST increase, saying Winnipeg will receive only $7 million for roads.