After 5,054 votes were cast, CAA Manitoba has declared the busy street in the Wheat City as one of the worst in the province.

The automobile association’s annual Worst Roads campaign ended Wednesday, taking the crown away from St. James Street in Winnipeg, which was deemed the “worst” last year. 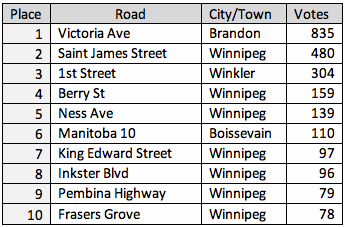 “It’s no surprise that Victoria Avenue held on to take the title of Worst Road,” said CAA Manitoba spokesperson Liz Peters. “From the start, it was clear Brandonites were on a mission to draw attention to the state of this road. By casting more than 800 votes in our campaign, they did exactly that, and their Worst Road is now slated for repair this summer.”

Winkler’s 1st Street came in third, but not for its road conditions. Voters for that provincial road say traffic lights with left turn signals are desperately needed, and it should be expanded to four lanes to accommodate the increasing traffic during rush hour.

CAA staff are preparing a final report to submit to municipalities around the province. The full report will be available to download on CAA’s website this Friday.