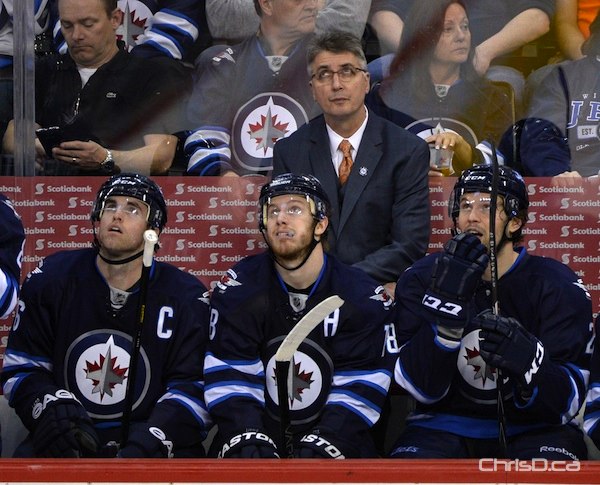 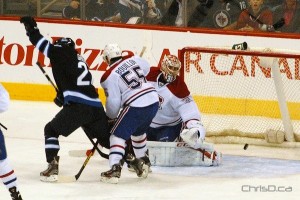 WINNIPEG — The Winnipeg Jets’ season came to a screeching halt Thursday night, and their season finalé matchup against the Montreal Canadiens at MTS Centre was barely two-thirds complete.

During the second intermission of the Jets’ eventual 4-2 loss, Winnipeg players became alerted to the unfortunate truth that their playoff hopes were quashed as the Ottawa Senators earned an overtime win in Washington, thusly eliminating the Jets from Stanley Cup playoff contention.

“We knew after the second that we were out,” said Jets goaltender Ondrej Pavelec, who finished the abbreviated 2013 season with a record of 21-20-3 in his fifth year with the club. “It’s not an excuse at all, but it’s tough to play when you know you’ve got 20 minutes left in the season and you’ve got nothing to play (for). But it’s not an excuse. We should finish the game, but we didn’t.”

The Jets were leading Montreal 2-1 through 40 minutes, but when the writing was on the wall they failed to put in a concerted team effort and allowed the Canadiens to score three unanswered third-period goals. 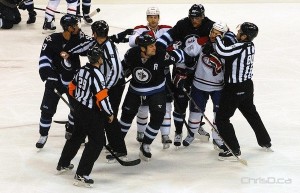 Winnipeg and Montreal plays scrap during the final game of the Jets’ season on Thursday. (STAN MILOSEVIC / CHRISD.CA)

“I don’t know what they knew,” said Winnipeg head coach Claude Noel of his team’s possible awareness entering the third that their season was finished. “To me it was pretty much a two-period game. The third period — I don’t know what they knew or didn’t know, but I thought the game was OK… I would’ve liked to have seen us play with a bit more zip in the first two periods.”

“It’s either you’re in or you’re not, and you want to be a team that’s in the playoffs every year and competing for a chance to win the Stanley Cup,” said Jets captain Andrew Ladd, who finished the season the team’s leading scorer with 18 goals and 46 points. “Not having that chance the last three years is frustrating.”

Winnipeg now enters an offseason full of hope and optimism for the young team. Recent first-round draft picks Mark Scheifele and Jacob Trouba appear ready to enter their first full-time NHL lineup, while the club holds six of the top 90 picks in the 2013 NHL Draft, including three in the second round and another two selections in the third.