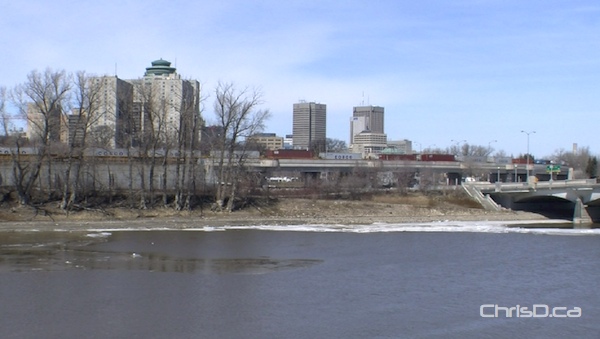 The Red River as seen from the Winnipeg Rowing Club earlier this week. (CHRISD.CA FILE)

A day after the province downgraded its flood forecast, the water has begun to rise.

Warm temperatures and a rapid melt have raised the Red River in Winnipeg three feet since Friday, where it sat at 6.7 feet at the James Avenue monitoring station Saturday morning. The water levels in the area are expected to continue to rise three feet in the next 24 hours.

The Red River walkway at The Forks is expected to be under water by late Saturday.

Some roads across the province have already been closed due to overland flooding, including PR 242 just east of Westbourne, while PR 350 about 16 km south of MacGregor is under an advisory for water over the road, but still remains passable.

The Red River at Emerson is now tracking to the forecast favourable weather peak in mid-May, similar to 2010 levels. The crest is expected to arrive in Winnipeg a week later.