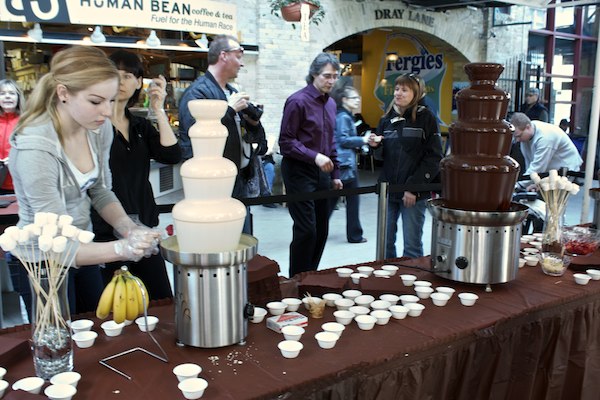 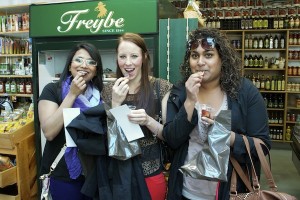 If you consider yourself a chocoholic, or at least somewhat of a chocolate enthusiast, there is something you should consider investigating.

Ciao! ChocolateFest 2013 is a month-long festival presented by The Forks. Thirty popular Winnipeg restaurants are offering at least one delectable dish containing the decadent ingredient for $7. The festival runs from April 1-30 so there are only a few days left to try out the different chocolate concoctions available.

I decided to celebrate the festival last weekend with the the Tour du Chocolat that took place from on April 20-21. Unfortunately, this part of the festival only ran on the two days. For $7 one could buy a Tour du Chocolat passport from the centre court. This would allow them one sample of a chocolate containing specialty from the many food vendors at The Forks Market.

The first thing I tried was a chocolate kirsch sour cherry cream puff from Tall Grass Bakery. A light, but rich tasting cherry chocolate cream was sandwiched between two light, fluffy, puff pastries that were slightly crispier on the outside. The top was then drizzled with a dark chocolate sauce and it was a very delicious, light, chocolatey treat. 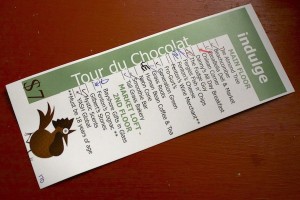 At the Grass Roots Prairie Kitchen the Tour du Chocolat offering was chili molé. This is a traditionally Mexican savoury sauce contains chocolate, but this particular dish has a prairie take on it because it also contained bison chili. I was a little hesitant to try it, because I could not imagine chocolate as an ingredient in a meat chili. However, it was actually very good and ended up being one of my favourite things I tried on the tour. The chocolate ingredient was not overpowering at all and actually gave the dish a nice sweet kick to the rich, spicy, savoury mix.

The centre court also had three chocolate fountains flowing. One contained white chocolate, another milk chocolate, and the final one flowed with dark chocolate. A selection of fruits and marshmallows were available for people to try once dipped into the fountain of their choosing.

I went for a classic strawberry dipped in dark chocolate. The chocolate was warm, rich, and went perfectly with the freshness of a sweet, juicy, strawberry. This was one station people could visit a couple of times to try different chocolate and fruit/marshmallow combinations which was nice.

A bag was also given to participants to hold any chocolate swag that might be given out. Takeaways included foil-wrapped chocolate bon bons, a sample of chocolate mint rooibos tea, and a chocolate scented incense stick.

This was a great way to try out the different ways one can prepare chocolate. It is sometimes easy to forget what a versatile ingredient chocolate is. It was also the perfect way to experience many of the vendors that The Forks Market has to offer.

If the Tour du Chocolat takes place again next year I would definitely suggest checking it out. However, there are still a couple of days to check out other restaurants participating in Ciao! ChocolateFest 2013. It is a chocolate lover’s dream festival and will definitely open your mind up to new possibilities for one of our world’s confectionery favourites.

Check out all of the Ciao! ChocolateFest 2013 offerings here.