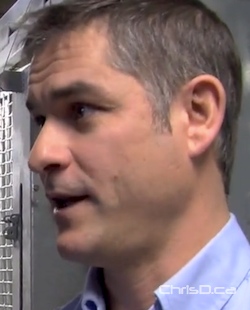 The Assiniboine Park Zoo’s director is leaving the city for Australia.

Tim Sinclair-Smith, who was director of zoological operations, is returning to his native country with his wife and 22-month-old son to be closer to their extended family.

“I’ve grown extremely close to our APC (Assiniboine Park Conservancy) team so it’s going to be very hard to leave,” Sinclair-Smith said of his time at the zoo since joining in January 2011.

“I’m so proud of what we’re building here and all Manitobans should be just as proud — with all the changes coming in the next few years the Assiniboine Park Zoo is launching itself into the upper class of animal experiences and conservation programs.”

Sinclair-Smith has been instrumental in the zoo’s $90-million rehabilitation phase, which has seen the construction of the Journey to Churchill exhibit (opening in 2014) and the arrival of Hudson the polar bear.

Sinclair-Smith said he looks forward to taking a well-deserved vacation, but thinks his next path will take him to another zoo — a profession he’s worked in his entire life.

A replacement hasn’t been named.