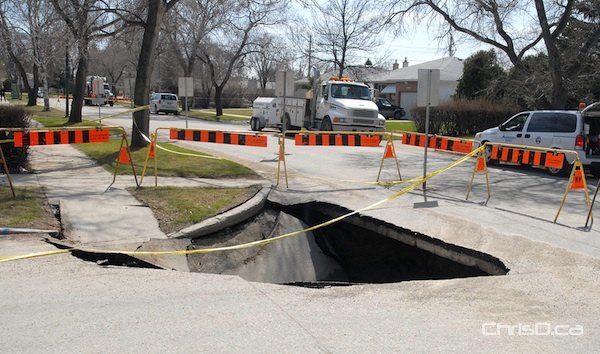 A sinkhole at the corner of Airlies Street and Ashbury Bay on Sunday, May 12, 2013. (STAN MILOSEVIC / CHRISD.CA) 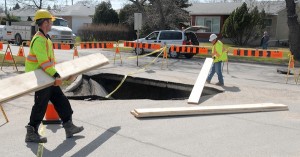 Workers place pieces of lumber on top of a sinkhole in Garden City on Sunday. (STAN MILOSEVIC / CHRISD.CA)

A massive sinkhole was the centre of attention in one Garden City neighbourhood on Sunday afternoon.

The gaping hole at the corner of Airlies Street and Ashbury Bay was taped off by Winnipeg police before City of Winnipeg and Manitoba Hydro crews arrived on scene.

Pieces of lumber were brought in to put on top of the hole, which stretched about 30-feet wide.

No word on what caused the crater-like opening to form.