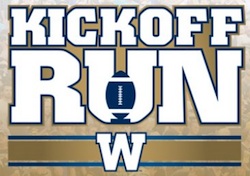 The Kickoff Run will see fans run with a CFL football through eight communities leading up to the season opener on June 27 in Winnipeg.

A convoy of volunteers and Blue Bomber alumni will escort the ball and the Grey Cup as 300 runners take their turn with the ball.

“It’ll be a proud moment for us all to see this ball, touched by so many fans, make its way to centre field as an important part of the June 27th opening ceremonies,” said Kickoff Run ambassador Doug Brown. “The opening of Investors Group Field will be a landmark day for football fans and the community alike and I am excited to be a part of this new era in Blue Bomber football.”

Details on how to register will be announced on May 21 in the Winnipeg Free Press.

Once all runners have been selected, the final 20 will be chosen to participate in the opening ceremonies when the ball will be run to centre field by a surprise guest.