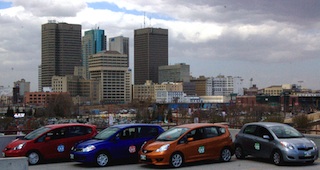 A Winnipeg car-sharing service has doubled its fleet of fuel-efficient vehicles around central city neighbouhoods.

Peg City Car Co-op is expanding its service to include West Broadway, Corydon Village, the University of Winnipeg, and further into downtown Winnipeg.

“This is a big step for the car co-op. By doubling our fleet, we can expand the carshare network to serve more neighbourhoods and provide even better service for our existing members,” said Shoni Litinsky, president of Peg City Car Co-op’s board.

“It’s a key part of our overall strategy to provide the “sometimes drive” option for Winnipeg residents who get around primarily by biking, walking and taking the bus but want occasional access to a car.”

Peg City Car Co-op has grown to 140 members and counting since its inception two years ago. Investment shares helped the co-op raise $66,000 to carry out its expansion.