‘Peggers Can Speak Out on City in ‘Urban Love Letters’ 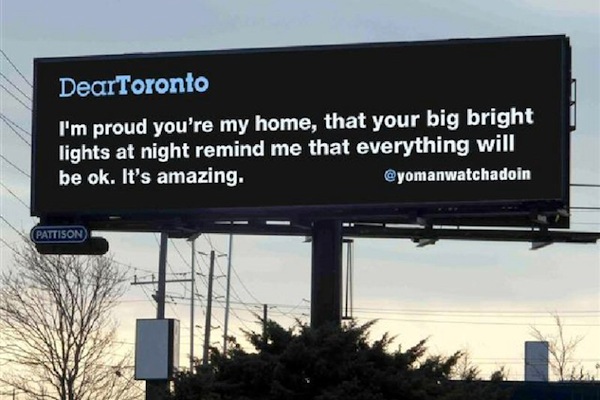 A Dear City Canada billboard in the Toronto area. Similar signage will appear in Winnipeg July 29 to August 11. (HANDOUT)

Pattison Onestop and Spacing Magazine are launching “Dear City Canada,” a creative dialogue expressing pride and joy, opinions and criticisms, love and suggestions about the cities Canadians live in.

Throughout the summer months, tweeted letters submitted by participants from across Canada will be shared on Pattison Onestop’s network of screens and digital billboards.

The final deadline to submit tweeted letters to the city you love is June 15, 2013 by tweeting @DearCityCanada.

Throughout July and August, tweeted letters by urbanists in 19 cities from coast to coast will be shared on Pattison Outdoor Digital Billboards in the respective cities.

Billboards will run in Winnipeg, Regina, Calgary and Edmonton from July 29 to August 11. Other cities will see their billboards in early July.