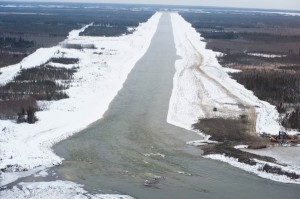 The Manitoba government is making the Lake St. Martin emergency channel a permanent piece of flood-fighting infrastructure, while at the same time increasing the capacity of Lake Manitoba.

Part of the project is coming after the province received recommendations from the Lake Manitoba Lake St. Martin Regulation Review Committee that an additional outlet be constructed on Lake Manitoba to deal with inflows from the Portage Diversion.

“During the largest flood in Manitoba history, the emergency channel brought Lake Manitoba and Lake St. Martin back to regulatory levels within a matter of months,” Premier Greg Selinger said.

Selinger said the idea is to protect people and property around Lake St. Martin and Lake Manitoba, adding that engineers are already working on design plans for increasing Lake Manitoba outlet capacity.

“We know these two projects will be even more effective in regulating water levels on the lakes, protecting Manitobans from increasingly severe and unpredictable weather.”

The $250 million project will see construction begin in 2016 with a timeline for competition by 2021.

The province has notified the federal government of their plans, but no funding from Ottawa has yet been committed.