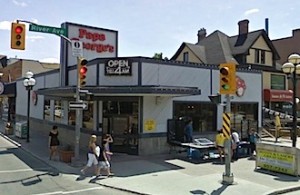 The location of the former Papa George’s restaurant in Osborne Village has a new tenant.

The owners of The Grove Pub and Restaurant plan to open another Winnipeg location at the busy corner of River Avenue and Osborne Street, ChrisD.ca has learned. The English-style eatery currently has a Stafford Street location, which owner Miles Gould has operated since 2010 and will continue to do so.

Renovations on the prime 3,000-square-foot space will begin in July in advance of the new tenant.

Papa George’s closed last October after 35 years in business to allow its owner to retire.

Speculation was mounting over who the new occupant would be, with rumours swirling of a 7-Eleven, Salisbury House or fast food chain restaurant taking over. G. T. Rowswell Realty Leasing Co., the company leasing the building, negotiated with an unnamed international restaurant chain for five months to no avail. The Grove has since signed a lease with the Winnipeg-based firm for the space at 93 Osborne Street.

The establishment is expected to open sometime in October.

Updated on Thursday, May 30