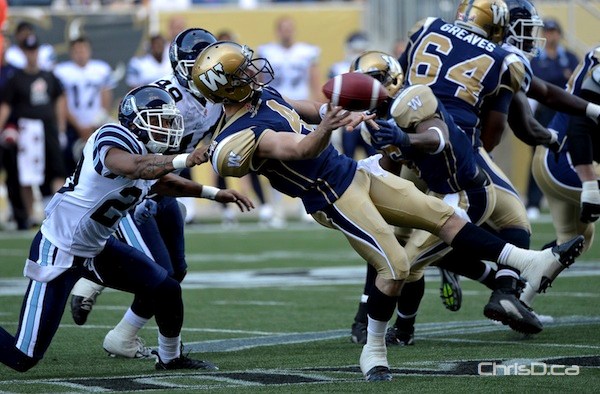 Winnipeg Blue Bombers quarterback Buck Pierce is tackled by Toronto Argonauts Bryan Payton during the first half of their pre-season game at Investors Group Field in Winnipeg on Wednesday, June 12, 2013. (FRED GREENSLADE / REUTERS) 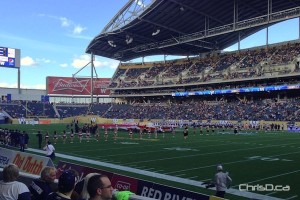 WINNIPEG — Fans of the Blue & Gold may wake up with a slight headache Thursday morning.

And while it could be a remnant of the public transit and overall traffic nightmare leading up to the first ever game at Investors Group Field, or the long lines at the concession stands as 28,628 worked their way around the unfamiliar digs, it is more likely from the copious amounts of alcohol consumed to numb the pain of having to watch the CFL’s 2013 pre-season opener. Final score — Toronto Argonauts 24, Winnipeg Blue Bombers 6.

But football fans in Winnipeg shouldn’t worry too much just yet. A) Pre-season games don’t count. And B) Nearly no Bombers players who will be the eventual starters come the regular season opener on June 27 played any meaningful amount of time on Wednesday night.

Yet with that said, the resounding message from nearly everybody inside the Winnipeg locker room is — there’s work to be done. And according to Blue Bombers head coach Tim Burke, there’s a lot.

“I thought our linebacker play was not up to par. And then when we got into our second group, our defensive linemen, some of our ends just didn’t do what they were supposed to do,” said Burke.

All four quarterbacks saw action against the Argos, and Winnipeg No. 1 Buck Pierce struggled in his limited time.

Pierce went 0-for-5 passing with an interception in three series. He scrambled on Winnipeg’s first offensive play for seven yards.

The best looking Winnipeg pivot was Max Hall, who entered the game late in the first quarter and went 7-for-15 for 69 yards and an interception. The 27-year-old former NFL starter and CFL rookie orchestrated the Bombers’ most successful possession; a 10-play, 63-yard drive capped by a Justin Palardy field goal from the 34.

“I thought I did some good things, and I made some mistakes,” said Hall. “I thought I was able to get in a rhythm a few times. I’ve got to get used to having two downs instead of three… because you can get off the field real fast.”

Another hopeful on offence is former Winnipeg Rifles receiver Brett Carter who made a couple nice catches and hopes he also caught the attention of his new coaches after signing a contract on Monday in order to play in his first professional game on Wednesday.

“It was really exciting,” said the 20-year-old Carter. “I think I did an alright job. I know there’s improvement to be made and I know I can, so I think I’ll be here for another week and hopefully for the rest of the year.”

And another Brett — also hailing from Winnipeg — made his mark on Wednesday night as well.

“It was nice to be able to hit a field goal. I haven’t done that since St. Paul’s High School,” said kicker Brett Cameron, son of Blue Bombers legendary punter Bob. His 37-yarder came in the third quarter to make it 17-6 Toronto.

And while Cameron came into camp out of the University of North Dakota as strictly a punter, the 22-year-old is now getting a shot at placekicking as well.

“The more things you can do, the more your chances are to make the team. That’s something I’ve always practiced when I was at school… and it’s something I need to continue to work on to be able to hopefully make a team.”

The Bombers travel to Guelph, Ontario next week to wrap their pre-season schedule, with their 2013 regular season opening in Winnipeg on June 27 against the Montreal Alouettes.