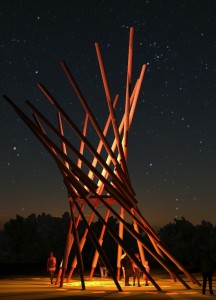 The Village Tower is a new attraction at this year’s Winnipeg Folk Festival and will be located in the centre of Festival Village. (HANDOUT)

The Winnipeg Folk Festival has a new landmark concert-goers can flock to beginning on July 10.

The Village Tower leans east towards the main stage at Birds Hill Park. It was designed by architects Hilderman Thomas Frank Cram, and is based on the Fibonacci sequence — a numeric pattern found in music and nature, particularly in the interlocking spirals seen in the centres of sunflowers and pinecones.

“This isn’t an urban plaza,” said Glen Manning of Hilderman Thomas Frank Cram. “We wanted to create a tower that looks at home in a forest clearing.”

The structure is composed of reclaimed and repurposed steel pipe and hydro poles. Lighting effects will enliven the tower during the festival.