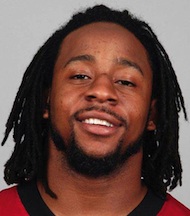 Hefney’s departure from the team comes less than a week after it was reported he was charged with marijuana possession in South Carolina on May 31.

Hefney spent the last four seasons with the Blue and Gold.

“We would like to thank Jonathan for his contributions to the Winnipeg Football Club over the past several seasons,” vice-president and general manager Joe Mack said in a release.

“Jonathan always played the game with heart and we wish him well in his future endeavors as we look to the emergence of our young talented crop of defensive backs that we have in camp.”